Google recently launched a new ~6 month (for complete newbies) certification through Coursera called the Google IT Support Professional Certificate that’s supposed to be an equivalent to the CompTIA A+ certification. To get straight to the point, this certification won’t get taken seriously if a) Google doesn’t fix the major issues with the labs in the course, and b) probably still won’t be taken seriously because it’s a $50/month proctored online course.

That said, I threw my hat in the ring to see what’s up and here are some of my thoughts on the course.

The labs are horribly broken and support from Google is lackluster/nonexistent.

The labs use a website called QwikLabs that spawn a temporary Google username and password and an instance running on the Google Cloud Platform. There doesn’t seem to be an issue with QwikLabs themselves but with the way the Google team made the labs– they sometimes didn’t update the score properly, the directions were often contradictory/incorrect/and/or confusing, and the instances were poorly configured and took up to 10 minutes for the start up scripts to run before you could begin working. The biggest issue was that on many labs the scores never synced back with Coursera causing an incomplete grade. This was an issue for weeks after launch and the Google Mentors (as Coursera calls them) continually promised updates coming soon and even stated that they were working when many of them were still broken. Eventually I had to take screenshots of my completed work and submit them to Coursera support to manually update my grades.

This was incredibly frustrating because I would have completed the entire cert within the Coursera free 7-day trial but instead took two weeks of piddling around waiting for the labs to be fixed.

The video lessons were okay.

That’s not to say they were especially good, but I wasn’t expecting much from an extremely entry-level tech series. They watched kind of like a series of flashcards with keywords and definitions. I also found some of them a tad long winded and frustratingly digressive. But over all not too bad. Oh, and life pro tip: you can watch them back at 1.25x or even 1.50x speed by clicking on the option in the bottom right-hand corner of the Coursera player.

I actually liked the (albeit broken) labs.

QwikLabs was actually a fairly interesting experience. I liked being able to spin up an instance to play with quickly and for free. Additionally I got some new experience in tools like Chef and using the Google Cloud Platform.

It made me learn Ruby.

Look, I don’t know why I put it off for so long. I know I need to know Ruby to develop and work with Metasploit modules but dang if I didn’t just want to get by with Python! This course actually had a section dedicated to Ruby and because of that I finally got a little hands on practice with it. Learning a new programming language through videos is absolutely loathsome and unnatural, so I went over to Codecademy and quickly ran through the Ruby lessons for this lesson.

The idea of this certificate was a bit odd to me at first. While the skills you will learn are definitely valuable, I question the relevance of some of the topics. I’m glad I used Chef, but will I be better suited for providing support specifically because of it? I think not. Additionally, it’s missing an entire chapter on printer troubleshooting, so it’s not even close to the detailed skills tested in the CompTIA A+ certification that people like to compare this to. I believe the purpose of this certificate is merely demonstrate a technical aptitude and an ability to learn a specialized task that one might be expected to know in an IT support department. If you’re just getting started in the IT field, I would recommend this certification. 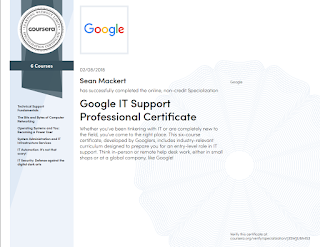 Sean Mackert is an IT professional passionate about security and helping inform others.